Going Against Guidance, 1 in 5 Cancer Pts Take Supplements to Lower Risk of Recurrence 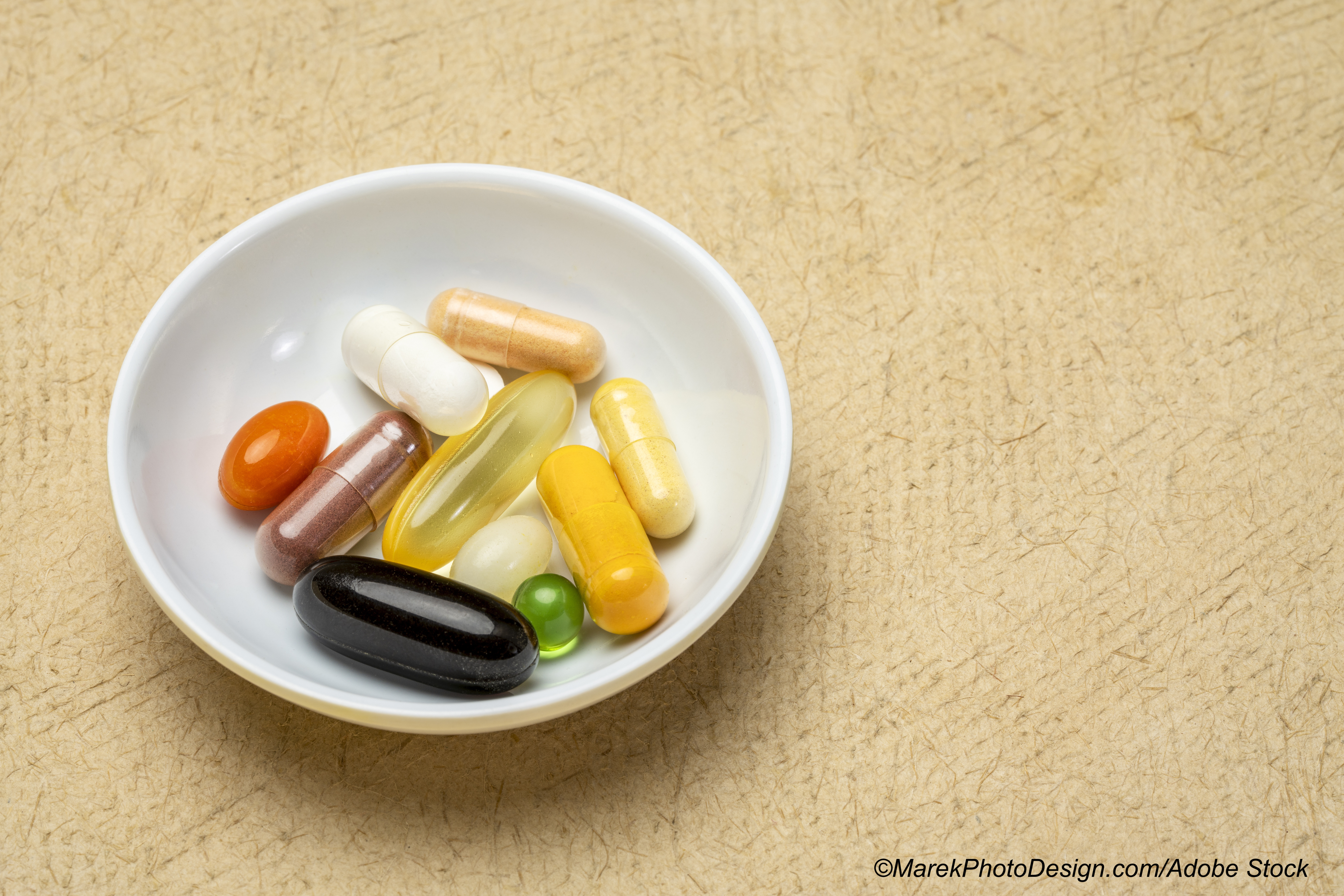 A recent cross-sectional survey of just over 1,000 adults with breast, prostate, or colorectal cancer found that 40% used dietary supplements (DSs) and 19% believed that taking DSs would help reduce their risk of cancer recurrence.

Researchers also found that the use of supplements was more common among women, those without obesity, and those who ate recommended amounts of fruits and vegetables. Fish oils were the most common supplements taken, followed by calcium with or without vitamin D, multivitamins, and other supplements, according to the survey, which used baseline data for recruitment from the Advancing Survival Cancer Outcomes Trial (ASCOT).

“Some women mentioned during phone 24-hour recalls that they had been prescribed a calcium and vitamin D supplement to reduce the osteoporosis risk associated with their cancer medication,” wrote Rana Conway, PhD, RNutr, of University College London, and colleagues in the journal Cancer. “Osteoporosis is a known side effect of some breast cancer medications and is more prevalent in older women than other groups; it was reported by 9% of the ASCOT participants. There was no indication that having prostate or colorectal cancer was associated with use of any specific type of supplement.”

The study authors also noted that the most common comorbidity reported by the survey respondents was arthritis, which also might explain the prevalent use of fish oils and calcium.

These results, however, fly in the face of current guidelines, study authors pointed out, especially when it comes to cancer prevention. In fact, the World Cancer Research Fund states specifically: “Do not use supplements for cancer prevention.”

The American Cancer Society (ACS) also advises against the idea of using supplements to reduce cancer risk: “Although a diet rich in vegetables, fruits, and other plant-based foods may reduce the risk of cancer, there is limited and inconsistent evidence that dietary supplements can reduce cancer risk. Further, some studies have found that high-dose supplements containing nutrients such as beta-carotene and vitamins A and E can actually increase the risk of some cancers. Nonetheless, more than half of U.S. adults use one or more dietary supplements.”

The ACS added: “Some supplements are described as containing the nutritional equivalent of vegetables and fruits. However, the small amount of dried powder in such pills often contains only a small fraction of the levels in the whole foods, and there is very little evidence supporting a role of these products in lowering cancer risk. Food is the best source of vitamins, minerals, and other important food components. If a dietary supplement is used for general health purposes, the best choice is a balanced multivitamin/mineral supplement containing no more than 100% of the ’daily value’ of nutrients.”

Ultimately, they wrote: “At this time, the ACS does not recommend the use of dietary supplements for cancer prevention.”

For their study, Conway and colleagues had participants complete a mailed survey as well as telephone or online 24-hour dietary recalls (MyFood24). The survey questions covered general information, including age, gender, ethnicity, marital status, education, cancer treatments, cancer type, cancer stage or whether it had spread, and comorbid conditions. They were also asked about lifestyle and cancer, such as the importance in reducing risk of cancer recurrence, with a list of items that might do that—supplements were among the responses.

In all, 5,835 responses to the survey were completed with 1,151 individuals indicating their interest in the trial. There were 1,049 who competed the 24-hour recall, and these data were used in the analysis. Most participants were White (94%) and female (62%), and the mean age was 64.

“We found one in five people who had been treated for cancer mistakenly thought that taking vitamins or other supplements would help reduce the risk of their cancer coming back. Also, those who believed supplements were important for reducing their risk of cancer recurrence were three times more likely to take them,” said Conway in a statement about the study. “As the number of people living with or beyond cancer increases, there is a growing need for a more holistic approach to long-term health care. Information about the role of supplements and the lack of evidence that they reduce cancer recurrence would be beneficial, alongside discussions about the benefits of healthy eating and physical activity.”

In the same statement, Martin Ledwick, RN, MSc, head information nurse at Cancer Research U.K., noted, “There’s no evidence that taking unprescribed supplements can prevent cancer from coming back, and some vitamins or minerals could interfere with how well cancer drugs work. It’s important that any cancer patient who is considering taking supplements discusses it with their doctor, specialist nurse, or dietitian.” Ledwick was not an author on the study.

Limitations of the study include that the data were self-reported, limiting the study to those with specific cancers, and the 24-hour record missed intermittent supplement use. The findings also may not be generalizable outside the U.K.

The study was funded by Cancer Research UK.