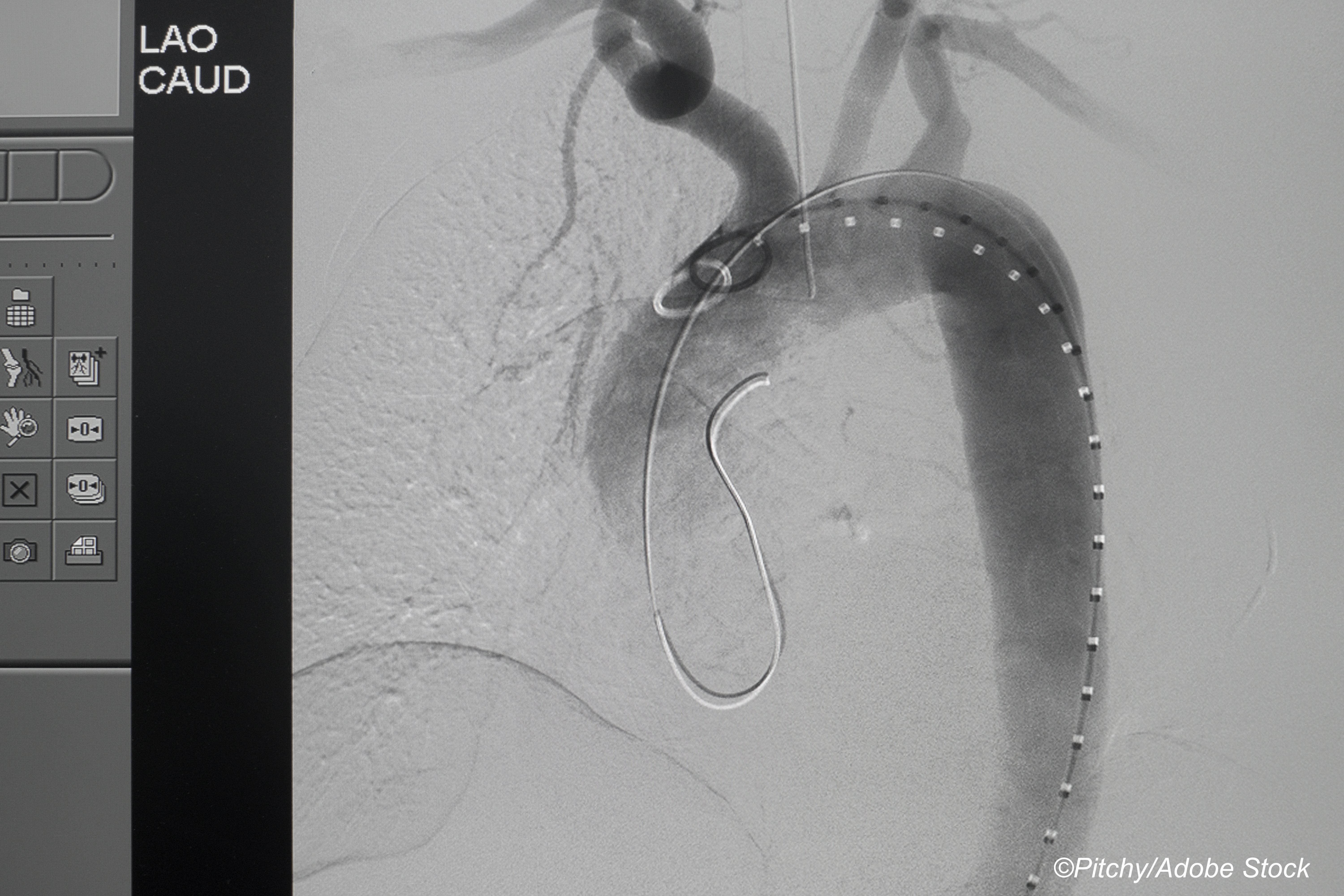 The SYNTAX score II 2020 (SSII-2020), the latest version of an angiographic tool used to grade the severity of coronary lesions identified by diagnostic angiography, was a reliable predictor of 5-year mortality in a large observational study, thus confirming the clinical utility of SS11-2020 to support revascularization decisions in real-world patients.

“When patients were grouped according to the predicted 5-year mortality [absolute risk difference (ARD), <4.5% (equipoise of PCI and CABG), and ≥4.5% (CABG better), the observed mortality rates after PCI and CABG were not significantly different in patients with lower predicted ARD (observed ARD: 2.1% [95% CI: 0.4%-4.4%]), and the significant difference in survival in favor of CABG was observed in patients with higher predicted ARD (observed ARD: 9.7% [95% CI: 6.1%-13.3%]),” wrote Hironori Hara, MD, of the Department of Cardiology, Academic Medical Center, University of Amsterdam, Amsterdam, the Netherlands, and colleagues in the Journal of the American College of Cardiology. “For MACE, the SSII-2020 could not recommend a specific treatment with sufficient accuracy.”

The SYNTAX score was originally developed in 2005 following the FDA approval of the first drug-eluting stents (DES)—the sirolimus-eluting CYPHER stent in 2003, followed by the paclitaxel-eluting TAXUS stent in 2004. With DES technology, interventional cardiologists and thoracic surgeons began a low-key, but intense, turf battle for cases. The emergence of catheter-based transcatheter aortic valve replacement technology—as demonstrated in the PARTNER trials that would introduce the heart team comprised of medical, interventional, and surgical specialists—was half a decade away.

Against that background, a tool to aid in patient selection was an attractive option. To help identify cases best suited for catheter-based treatment or surgery, researchers developed an algorithm to grade complexity of coronary lesions identified by angiography—the SYNTAX Score—which used a numeric score ranging from 0 to 33 or higher, with low risk lesions scored 0 to ≤22, intermediate 23-32 and high risk ≥33.

With a scoring tool in hand, the stage was set for a head-to-head trial. The SYNTAX trial compared CABG to coronary artery stenting in patients with severe coronary artery disease, defined as three-vessel or left main artery disease, and used SYNTAX scoring to characterize the lesions. The results of the 1,800-patient randomized trial, reported at the European Society of Cardiology Congress in 200 and later published in The New England Journal of Medicine, confirmed that CABG should remain the standard of care among those patients because the rate of major adverse cardiac or cerebrovascular events was significantly lower (17.8% for stenting versus 12.4% for CABG, P = 0.002). But the stroke rate was significantly higher with CABG, 2.2% versus 0.6%, P=0.003.

If that seems like a disconnect, it was, as it pointed to one of the difficulties with composite endpoints. What was really happening in SYNTAX is that the composite 12-month MACE rate was driven by a high rate of revascularizations in the stent group—13.5% versus 5% in the CABG group—which outweighed the uptick in non-fatal stroke seen with CABG. In 2010, Alamri et al wrote, “[T]hose with high score do better with CABG. SYNTAX trial showed that 66% of patients with 3VD or LMD are still best treated with CABG. In the remaining 1/3 of patients with low syntax score, PCI may be considered as an alternative to surgery. Finally, medical treatment should be optimized in patients going for CABG.”

SYNTAX results were reported at regular follow-up intervals, and with additional data, the SYNTAX algorithm was refined. For example, SYNTAX II SSII factors in “7 clinical variables(age, creatinine clearance, left ventricular ejection fraction, unprotected left main CAD, peripheral vascular disease, sex, and chronic obstructive pulmonary disease) in addition to the original SYNTAX score in its modeling,” wrote John J. Squiers, MD, and J. Michael DiMaio, MD, of Baylor Scott & White The Heart Hospital in Plano, Texas, in an editorial published with the study. And SSII-2020, “incorporates many recognizable features of its predecessor but not without a twist—patient sex was discarded from the prior model, whereas diabetes and current smoking were added as predictive variables in the remake.”

“The new score predicts 5- and 10-year mortality rates and 5-year major adverse cardiac and cerebrovascular events (MACE) rates for both revascularization modalities and the resulting absolute risk difference (ARD). However, the new score does not make any formal binary recommendation on the preferred modality of revascularization,” Hara et al wrote.

Using data from the CREDO-Kyoto registry of PCI/CABG patients undergoing a first coronary revascularization, Hara and colleagues set about trying to independently validate SSII-2020 to predict a treatment benefit for CABG versus stents. They looked at outcomes of 7,362 patients—4,318 in the stent group and 3,044 who had bypass surgery—who were followed for a median of 5.3 years. Most of the patients were men and in their 70s. The average SYNTAX score in the PCI group was 24, and in the CABG group it was 29.

“The analysis of the CREDO-Kyoto PCI/CABG registry affirmed the potential utility of the SSII-2020 for predicting 5-year mortality as a tool to support decision making on revascularization, and we proposed ’predicted ARD of 4.5% for 5-year mortality’ as a threshold between ’equipoise of PCI and CABG’ and ’CABG better’ A heart team can calculate the predicted 5-year mortality after PCI and CABG and then calculate predicted ARD according to the SSII2020 in each patient. An absolute threshold of predicated ARD for 5-year mortality can help their decision making on revascularization and improve the clinical outcome of their patients, although the personal perspective of the patient and his/her treating physician should be also considered,” they wrote.

In their editorial, Squiers and DiMaiio agreed, noting that ARD may not be a familiar statistic for many clinicians, but “the concept is readily understandable and made even easier by the availability of online and app-based SYNTAX score II 2020 calculators.These calculators can facilitate real-world, clinical implementation of the SYNTAX score II 2020, which is “the first risk score, to our knowledge, validated for direct comparison of expected outcomes after CABG and PCI. In particular, the SYNTAX score II 2020 may provide objective data to inform and to support a heart team decision for maximally invasive CABG over minimally invasive PCI in appropriate patients…”

In addition to the limitations of a retrospective study, Hara and colleagues pointed out that the registry only included patients in Japan. Also, SSII-2020 was designed to predict 10-year mortality, and they only had a little over 5 years of data. Moreover, left ventricular ejection fraction data were missing in more than 10% of patients. Finally, “it is unavoidable that the long-term follow-up data and long-term prediction are based on partially outdated technology (e.g., TAXUS stent), whereas the evidence for contemporary technology can be derived only from short-term follow-up studies.”

Hara has received a grant for studying overseas from Japanese Circulation Society, a grant-in-Aid for JSPS Fellows, and a grant from Fukuda Foundation for Medical Technology.

Squires and DiMaio had no disclosures.