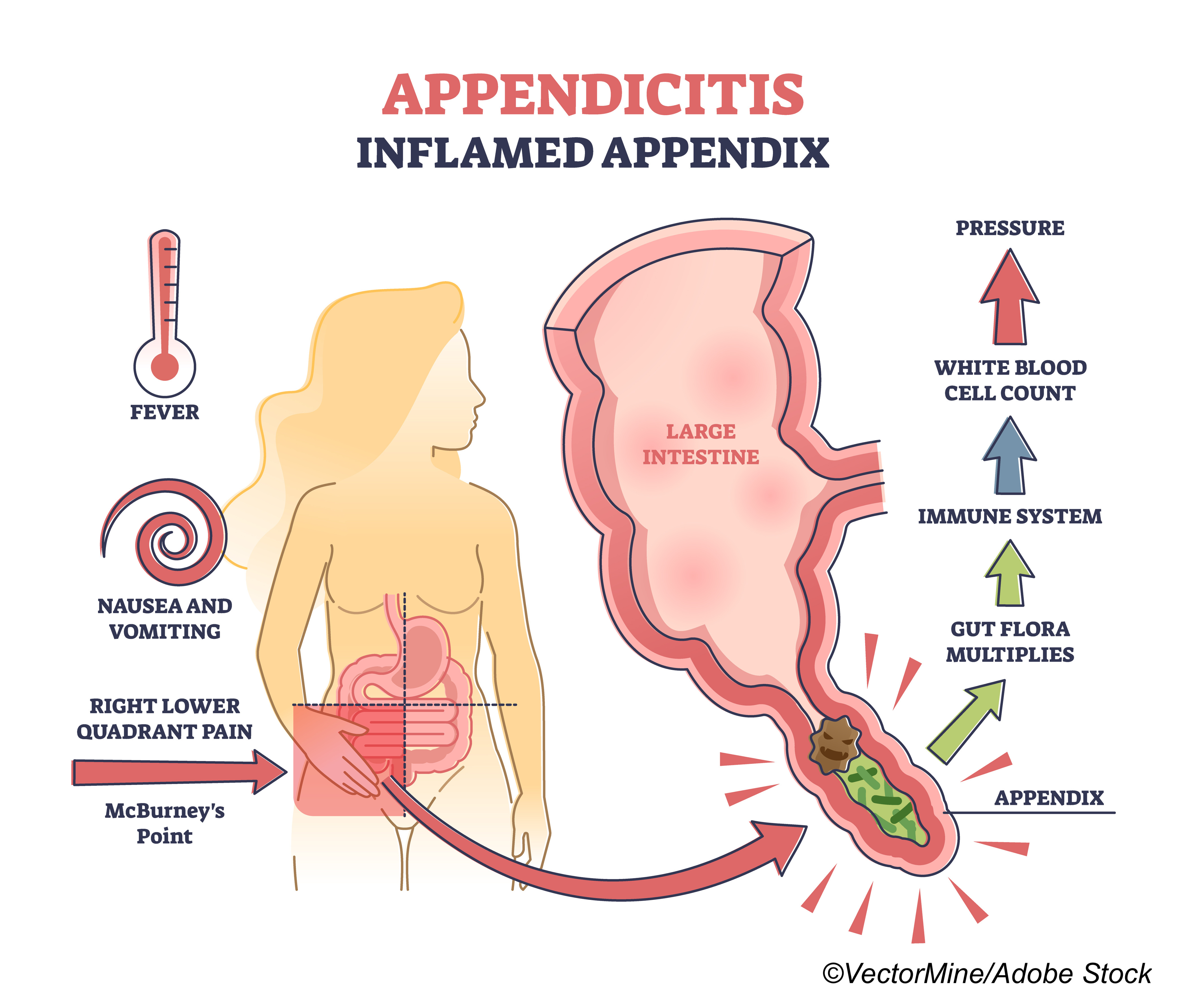 Patients may prefer antibiotics, but in the long run surgery may be necessary

Long-term results of an appendicitis trial—Comparing Outcomes of antibiotic Drugs and Appendectomy (CODA)—found that at four years out, nearly half of the patients in the antibiotic arm of the trial ended up having an appendectomy.

“In the first three months after taking antibiotics for the condition, nearly 7 in 10 patients in the antibiotic group avoided an appendectomy. By four years, just under 50% had the surgery,” David Flum, MD, MPH, co-principal investigator and professor and associate chair of surgery at the University of Washington (UW) School of Medicine, noted in a press release on the updated CODA results.

Flum and the other CODA investigators reported the latest results in correspondence to The New England Journal of Medicine. In that letter, they concluded: “Although some clinicians and patients may determine that these longer-term rates of appendectomy make antibiotics a less desirable treatment than early appendectomy, substantial numbers of patients report a preference for antibiotics, even if appendectomy may ultimately be necessary.”

This updated analysis is key, considering that the American College of Surgeons now supports first-line antibiotic treatment for uncomplicated appendicitis based on findings from CODA and other trials, especially during the Covid-19 pandemic.

In the earlier CODA findings, which were also published in NEJM, Flum and colleagues concluded that antibiotics were non-inferior to appendectomy for treatment of appendicitis. At that time, as BreakingMED reported, the investigators noted that nearly a third of patients went on to have an appendectomy.

“In that trial, we found that antibiotic treatment was non-inferior to appendectomy on the basis of a measure of general health status at 30 days, with similar rates of safety events,” Flum and colleagues reported. “Among the patients in the antibiotics group, 29% had undergone appendectomy by 90 days (41% with an appendicolith versus 25% without).”

The current analysis is “important for clinical decision making,” the researchers wrote.

In the CODA trial, recurrence was defined as patients with appendicitis going on to have surgery 31-365 days after trial randomization. There were 1,552 patients with confirmed appendicitis, with or without appendicolith, who were randomized to either antibiotic treatment or surgery.

“Appendicitis was considered to have been confirmed on the basis of the pathological findings,” Flum and colleagues wrote of the current analysis. “Data collection ended 1 year after the final patient had been recruited, with 82% of the patients enrolled for more than 2 years, 44% for more than 3 years, and 15% for more than 4 years.”

In the antibiotics group, the rate of subsequent appendectomy at varying time intervals was:

Whether the patients had appendicolith or not, complications were rare in the two treatment groups.

In BreakingMED’s original reporting, Danny Jacobs, MD, MPH, of Oregon Health and Science University in Portland, wrote in an editorial when the first findings were reported in NEJM that the study raised key questions that suggest antibiotics alone is not the best treatment for appendicitis. Jacobs noted that, at 90 days out, there were a significant number of patients treated with antibiotics who went on to have an appendectomy, as well as high complication rates, more in-hospital time, and more trips to the ED.

When first published, the limitations of the CODA study included the fact that there was a short follow-up time and only 30% of the patients agreed to randomization. In the current analysis, the researchers noted that limitations also include a lack of data beyond 1 or 2 years for many of the patients; not having a window of time to define recurrence; and using non-standard pathological reports, with some event missing reports.

Nonetheless, this updated analysis still underscores the original finding of non-inferiority of antibiotics versus surgery.

“Given these results and new treatment guidelines, it is important for surgeons and patients to discuss the pros and cons of both surgery and antibiotics in deciding on the treatment that’s best for that person at that time,” Giana Davidson, MD, MPH, associate professor of surgery and director of the CODA trials clinical coordinating center, said in a press release.

The CODA trial was funded by the Patient-Centered Outcomes Research Institute (PCORI).