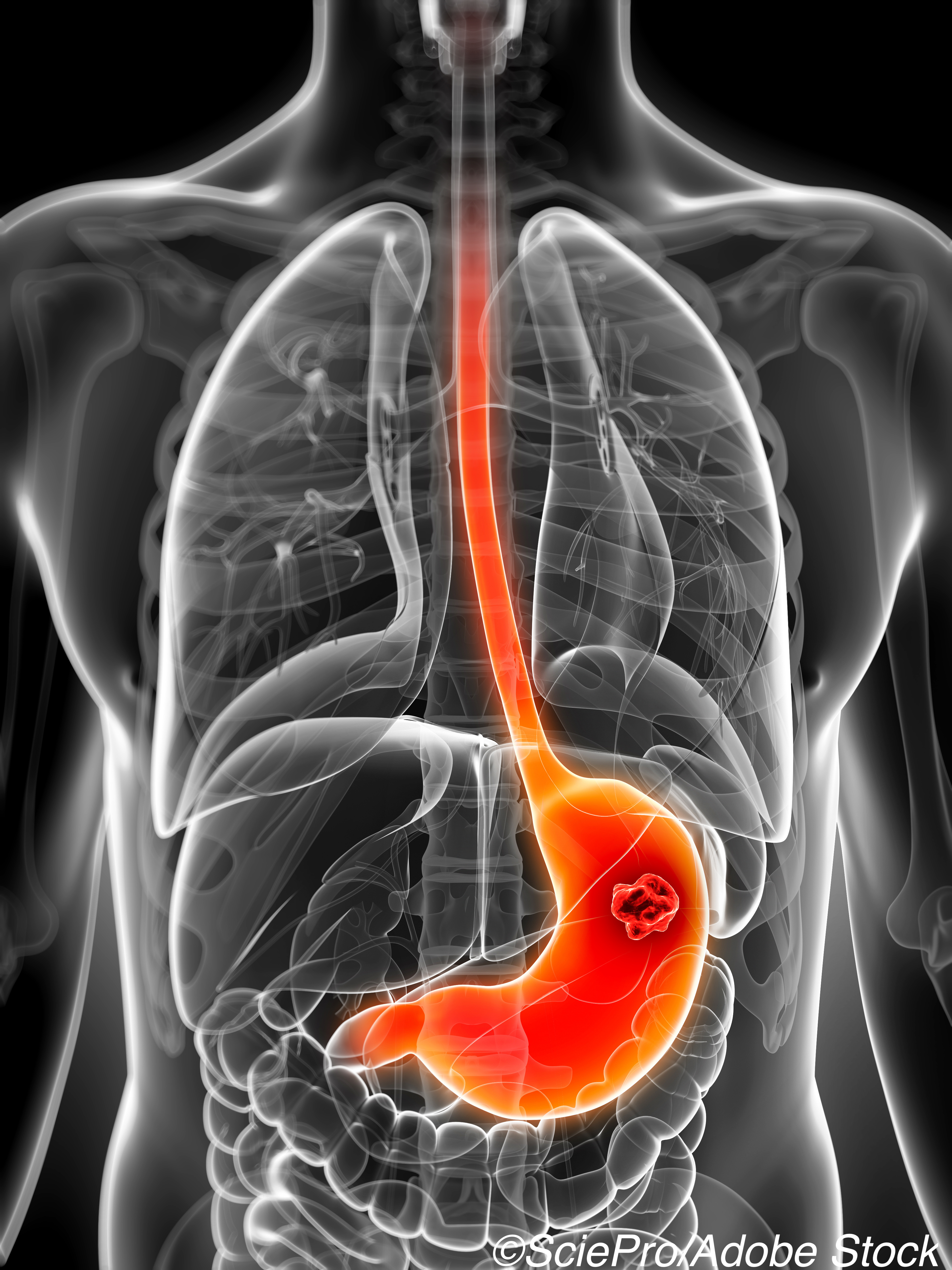 The combination of immunotherapy plus a multikinase inhibitor has shown impressive anti-tumor activity in advanced gastric cancer and the doublet was reasonably well tolerated, a single-arm, phase II trial has indicated.

After excluding 2 patients who were MMR-deficient, an objective response of 70% (95% CI, 50-86%) was seen in 27 patients with MMR-proficient tumors, researchers added.

“To our knowledge, this study is the first to evaluate the combined activity of lenvatinib plus pembrolizumab in patients with advanced gastric cancer in the first-line or second-line setting,” Kawazoe and colleagues observed.

“This combination showed a higher objective response rate than that of single drugs in previous studies…and further investigation of lenvatinib plus pembrolizumab in this disease setting is warranted,” they said.

On enrollment, patients had metastatic or recurrent adenocarcinoma of the stomach or gastro-esophageal junction and measurable lesions specified in the Response Evaluation Criteria in Solid Tumors (RECIST: version 1.1).

Treatment consisted of oral lenvatinib, 20 mg, once a day, and 200 mg intravenous pembrolizumab every 3 weeks until disease progression, development of intolerable toxicity or withdrawal of consent.

“The primary endpoint was investigator-assessed objective response rate according to RECIST,” the authors noted.

The median number of treatment cycles was 10 (95% CI, 7-18 cycles) and at data cutoff some 5 months after enrollment, 28% of patients were still receiving treatment, the rest having discontinued the protocol because of disease progression.

At a median follow-up of 12.6 months (Interquartile Range (IQR): 10.5-14.3 months), “[a] similar objective response rate was observed in patients receiving the study treatment as first-line and in those receiving it as second-line,” investigators pointed out.

Moreover, of those patients who achieved an objective response to treatment, responses were still ongoing in 45% of patients at the same data cutoff point.

In the overall group, 3% of patients achieved a complete response (CR); 66% achieved a partial response (PR) and disease stabilized in 31%, investigators reported.

Disease was also controlled in all 29 patients (100%, 95% CI, 88-100%) while all but one patient in whom disease stabilized had evidence of initial tumor shrinkage compared with baseline values.

Again, at the data cutoff point, the median overall survival (OS) had not been reached (95% CI, 11.8 months to not reached), the authors observed.

PD-L1 combined positive score (CPS) was evaluated in all patients while tumor mutational burden (TMB) could be assessed in 21 patients.

Progression-free survival rates also favored those with a CPS of at least 1 while median PFS rates were equivalent between patients with a high and a low TMB.

The most common grade 3 treatment-related AE was hypertension in 38% of patients followed by proteinuria in 17% and a drop in platelet counts in 7%—”most of which were reversible by a reduction [in the dose] of lenvatinib, dose interruptions or administration of antihypertensive drugs,” the authors observed.

Indeed, all but one patient required a dose interruption with lenvatinib because of treatment-related AEs and all patients required at least one dose reduction for the same reason.

Commenting on study results, Stefano Cascinu, MD, San Raffaele Hospital, Milan, Italy, pointed out that in contrast to these promising results, both KEYNOTE-062 in the first-line setting and KEYNOTE-061 in the second-line setting showed that treatment with pembrolizumab alone led to a response rate of only 16% in patients with advanced gastric cancer, both groups of patients having a PD-L1 CPS of at least 1.

On a cautionary note, however, the editorialist pointed out that a potential weakness of the study is a lack of preclinical data in gastric cancer and the fact that patients with gastric cancer were not included in an earlier phase I trial evaluating the same combination of lenvatinib and pembrolizumab.

Moreover, “[a] crucial point, as acknowledged by Kawazoe and colleagues themselves, is that these findings need to be confirmed in Europe and North America,” he emphasized.

This is because a subgroup analysis of the KEYNOTE-062 trial showed that pembrolizumab was more effective in Asian patients than in the non-Asian population.

Cascinu also pointed out that objective responses, while the primary endpoint of the study, were not reviewed centrally.

“Since it is not uncommon that investigators overestimate responses, this high proportion of responses should be further confirmed before moving toward a randomized phase III trial,” Cascinu suggested.

Cascinu had no conflicts of interest to declare.