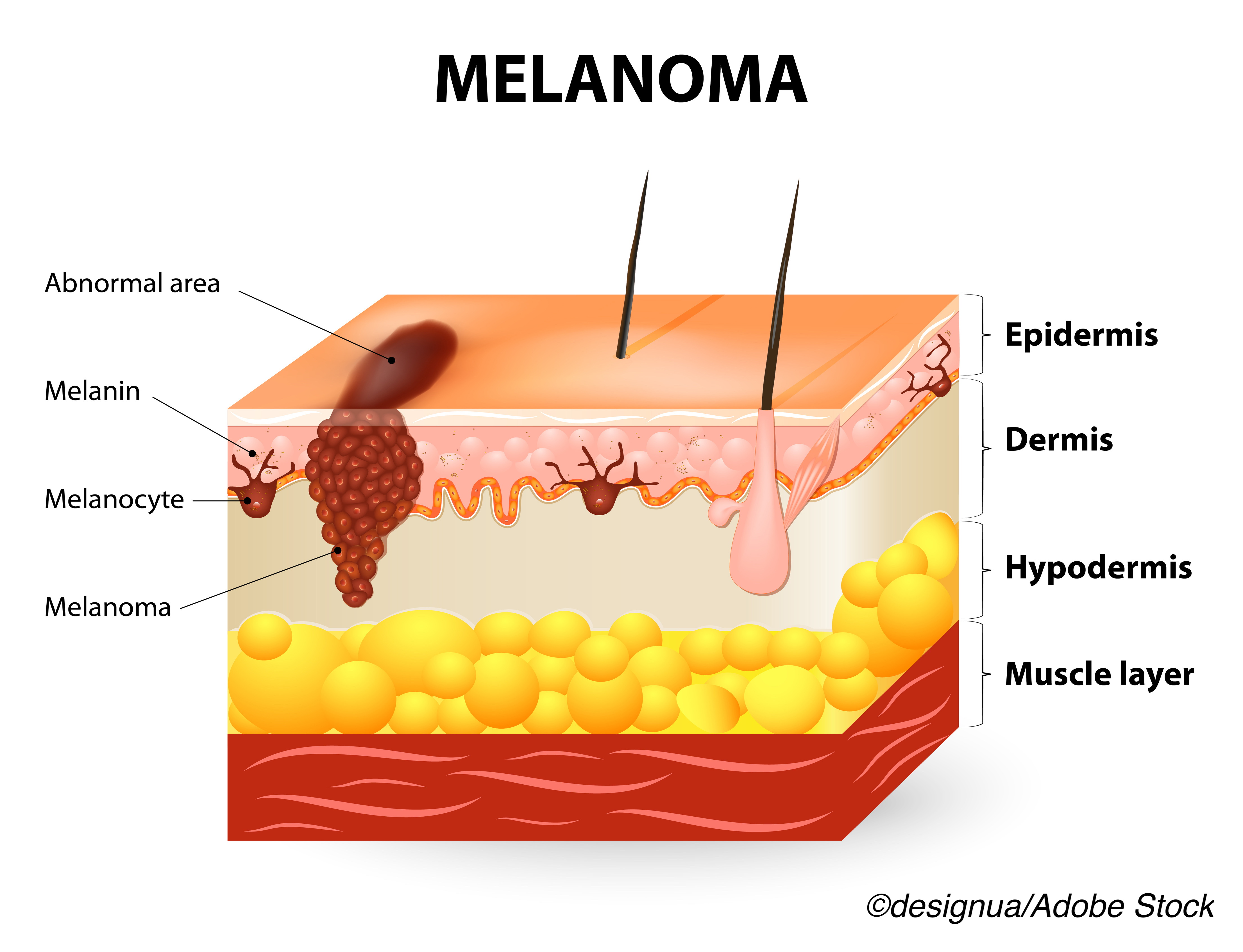 “Over the past few years, results from randomized clinical trials have… defined the superiority of adjuvant immune checkpoint inhibitors and targeted therapy over the long-standing peglylated interferon alfa-2b,” Alice Indini, MD and Francesco Grossi MD, both from the Fondazione IRCCS Ca’ Granda Ospedale Maggiore Policlinico in Milan, Italy, wrote in an editorial accompanying the study.

“Altogether, results from these clinical trials have played a key role in changing the treatment paradigm of stage III melanoma,” they stated.

The European Organization for Research and Treatment of Cancer (EORTC) 1325/KEYNOTE-054 trial involved a total of 1,019 adults with complete resection of cutaneous, stage IIIA, IIIB or IIIC melanoma.

“Patients received either an intravenous infusion of pembrolizumab 200 mg or placebo every three weeks for up to 18 doses for about one year or until disease recurrence [or] unacceptable toxicity,” the authors noted.

In an earlier report, investigators demonstrated that pembrolizumab improved recurrence-free survival by 43% at a HR of 0.57 (95% CI, 0.43-0.74; P<0.001) compared with placebo at a median follow-up of 15 months, leading to the approval of the drug in both the U.S. and in Europe for this patient population.

In the final results from the same clinical trial, the secondary efficacy endpoint of distant metastasis-free survival and an update of the recurrence-free survival results were presented for both the intent-to-treat (ITT) population as well as in patients with programmed cell death-ligand 1 (PD-L1) positive tumors.

Perhaps somewhat surprisingly, the much smaller group of 116 patients with PD-L1 negative tumors also achieved relatively equal benefit from adjuvant pembrolizumab whereas at 3.5 years, the distant metastasis-free survival rate was 58% (95% CI, 44.1-69.5%) for those in the adjuvant arm compared with 40.2% (95% CI, 27-53%) for placebo controls.

“The benefit from pembrolizumab in all patient subgroups was similar to that in the ITT population,” the investigators pointed out, including in patients with stage IIIA, IIIB or IIIC disease, as well as in patients with BRAF mutant tumors. Furthermore, recurrence-free survival rates at 3.5 years of follow-up were again longer in patients with PD-L1 positive tumors with adjuvant pembrolizumab at 61.4% (95% CI, 56.3-66.1%) compared with 44.1% (95% CI, 39.2-48.8%) among placebo patients, the authors noted.

Over the course of the entire trial, 39% of ITT patients treated with the PD-1 inhibitor had a recurrence or died compared with 57% of placebo patients and rates of recurrence or death were virtually identical in patients with PD-L1-positive tumors for both treatment groups.

Improvement in recurrence-free survival in the adjuvant arm was also seen in all types of recurrences:

As the authors pointed out, they have previously shown in other adjuvant trials that recurrence-free survival differences correlate well with overall survival (OS). However, whether the intermediate surrogates for OS as reported in the final analysis of EORTC 1325/KEYNOTE-054 will similarly correlate with an OS endpoint is unknown.

Uncharacteristically in adjuvant trials, patients on placebo were allowed to cross over to an anti-PD-1 or PD-L1-basted treatment if the disease recurred, which 70% of those with locoregional recurrence did, thus weakening any potential correlation with an OS endpoint, as the authors also pointed out.

Indini and Grossi noted that in fact, 23% of patients in the pembrolizumab arm who also experienced locoregional recurrence also received further anti-PD-1-based treatment.

“The further anti-PD-1 treatment positively affects post-recurrence survival, thus leading to a delayed assessment of the overall survival endpoint,” the editorialists emphasized, even though they agreed with the authors that given recurrence-free survival differences between treatments have correlated well with OS differences in other adjuvant trials, the observed improvements in both distant metastasis-free and recurrence-free survival endpoints seen with pembrolizumab in the current study could be “clinically meaningful.”

“Pembrolizumab was [also] the first immunotherapy to show that improved recurrence-free survival does not necessarily imply a reduction in HRQOL (health-related quality of life) in the adjuvant setting,” Indini and Grossi wrote.

“Such evidence suggests that the incidence of immune-related adverse events does not negatively influence QOL (quality of life) during adjuvant pembrolizumab presumably also because of the constant improvement in the management of treatment-related adverse events,” they said, and suggested that the use of neoadjuvant therapy has the potential to reduce the extent of surgery required in patients with high-risk melanoma and may represent another promising innovation in future treatment of melanoma.

The study was funded by Merck Sharp & Dohme.

Indini reported receiving personal fees and honoraria from Bristol Myers Squibb and Merck Sharp & Dohme and has served on an advisory board for Novartis.