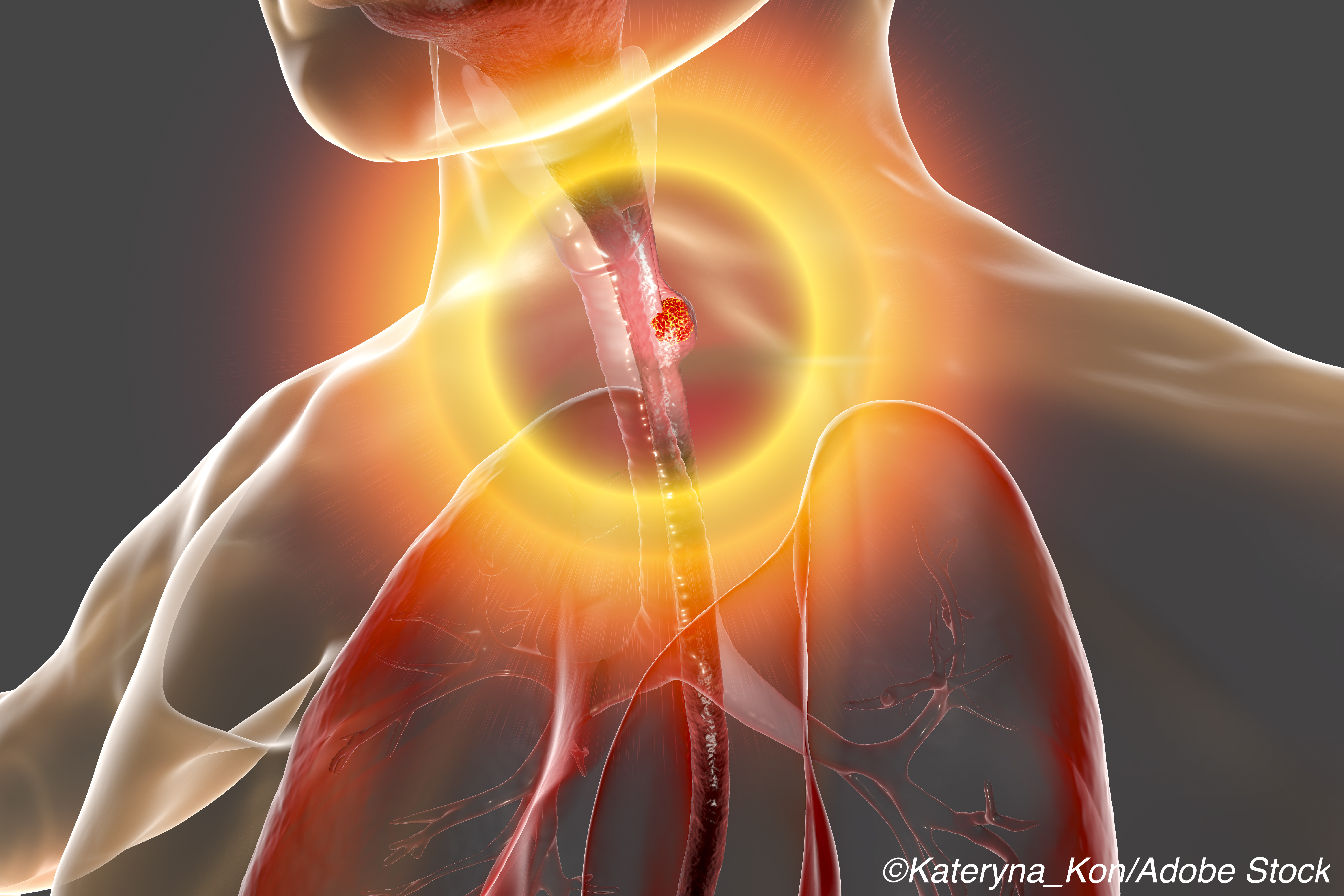 A closer and more sophisticated “read” of a CT scan could be used for pre-treatment response prediction in patients with esophageal squamous cell carcinoma (ESCC), researchers reported.

Using radiomics, or the extraction of features from clinical radiology images via data-characterization algorithms, they analyzed CT images with intratumoral, peritumoral, and combined models.

A test set that examined a combined radiomics model of seven intratumoral and six peritumoral features delivered an even better performance with an AUC ROC of 0.852 (95% CI 0.753-0.951), accuracy of 84.3%, sensitivity of 90.3%, and specificity of 79.5%, they reported in JAMA Network Open.

“We proposed a noninvasive, CT-based radiomics model with favorable predictive value using both intratumoral and peritumoral radiomics features to predict the possibility of pathological complete response [pCR] in patients with ESCC before receiving nCRT,” the authors wrote.

They pointed out that “The use of conventional parameters from baseline imaging alone has limited value in pretreatment prediction.”

Vardhanabhuti’s group used data from baseline CT imaging of ESCC patients in an effort to see if they could assess therapeutic response prior to treatment implementation through radiomics application of both intratumoral (conventional) and peritumoral features. They also examined the peritumoral regions surrounding the tumor, which may contain complementary and useful information.

The study “provides additional evidence for the value of peritumoral radiomics, specifically in the context of response prediction in esophageal cancer,” noted Ruijiang Li, PhD, of Stanford University School of Medicine in California, in an invited commentary accompanying the study.

“In addition to the use of intratumoral and peritumoral features and integrative radiogenomics analysis, a strength of this work is its multi-institution cohort study design, with independent validation of the radiomics model (albeit with a relatively small number of patients for validation),” he stated.

However, before this model can go from research to clinical practice, several issues must be addressed, Li said, including validating the model across different manufacturers’ CT scanners and across imaging protocols. In addition, a more diverse demographic and different cancers will require testing with the radiomic model, he added.

The retrospective analysis encompassed 231 ESCC patients (mean age 59.8 years; 83.1% men; 74.9% with stage III disease) who underwent nCRT and surgery. They had baseline contrast-enhanced CT imaging and treatment at the Sun Yat-sen University Cancer Center in Guangzhou, China, and the University of Hong Kong from April 2017 to December 2018.

The pCR rates of the training and test sets were 46% and 44.3%, respectively, according to the researchers. Two experienced radiologists manually delineated the intratumoral and peritumoral regions of interest.

“Although a wide range of performance across different classifiers was achieved in the test set, the combination of intratumoral and peritumoral features always improved the classification accuracy regardless of the choice of classifier, confirming the additional predictive value of peritumoral radiomics features,” the authors wrote, and this was independent of sex, smoking and drinking history, and tumor stage and grade.

The results indicated that a combined intratumoral and peritumoral radiomics model might be associated with lymphocyte-mediated immunity and cytokines such as interferons and interleukins. This implies the significant predictive value and functions of microenvironmental immune components in the innate chemoresistance or radioresistance in ESCC, they added.

The study was supported by the Health& Medical Collaborative Innovation Project of Guangzhou City, China, the National Natural Science Foundation of China, and the Fundamental Research Funds for the Central Universities.

Vardhanabhuti reported no relationships relevant to the contents of this paper to disclose. A co-author reported support from the Hui Pun Hing Memorial Postgraduate Fellowship.

Li reported grants from the NIH.