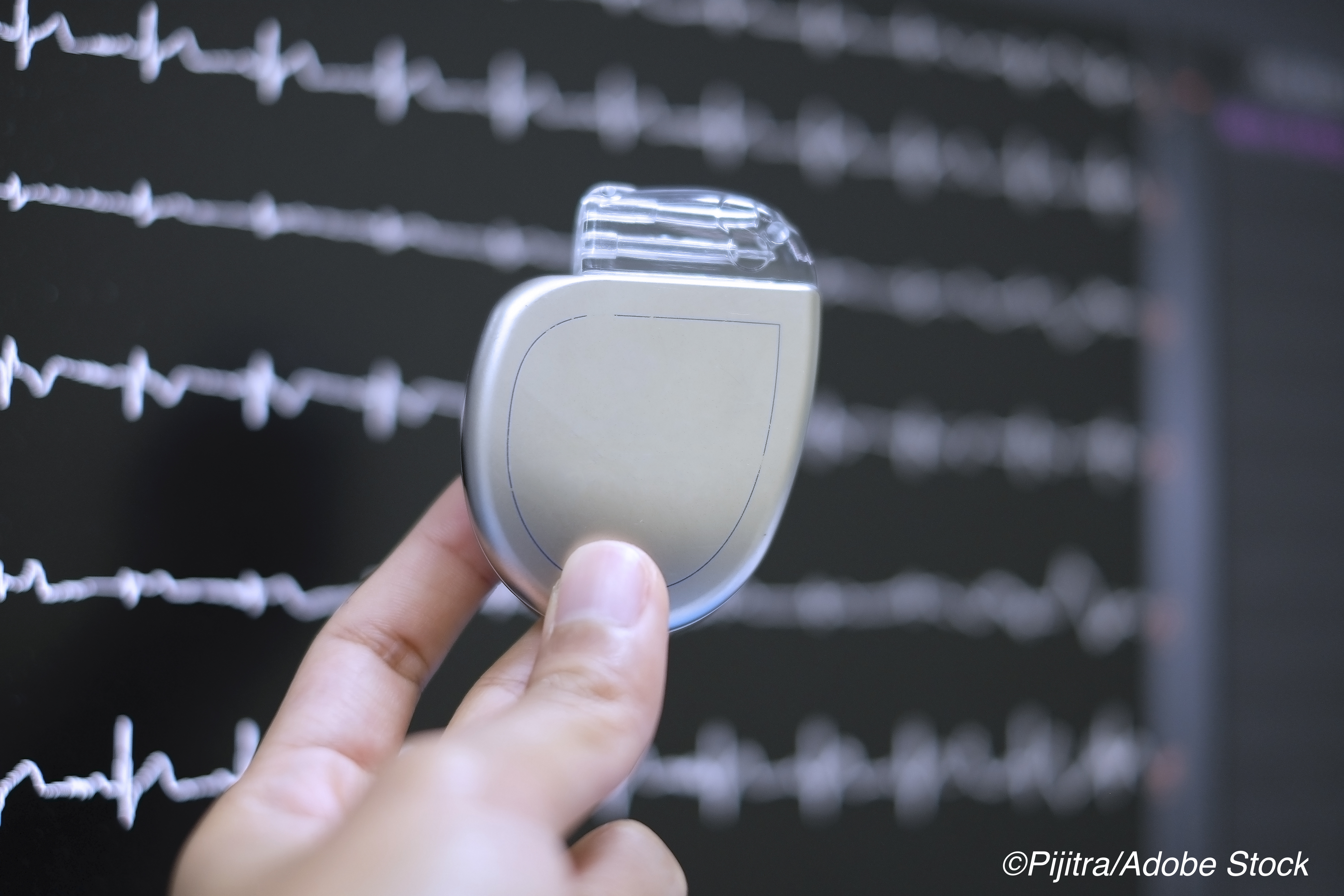 Despite differences, both systems are effective in preventing sudden death

The subcutaneous implantable cardioverter-defibrillator (ICD)—designed to avoid the complications possible with transvenous ICDs—proved noninferior to the transvenous ICD. Researchers from the Prospective Randomized Implantable Cardioverter Defibrillator Therapy (PRAETORIAN) trial found that, in both types of ICD, device-related complications and inappropriate shocks were comparable when used in patients with indications for ICD placement but not for pacing. They published their results in the New England Journal of Medicine.

“The extrathoracic placement of the subcutaneous ICD circumvents the need to enter the heart and vasculature but makes it impossible for the device to deliver pacing therapy,” wrote PRAETORIAN investigators led by Reinoud E. Knops, MD, PhD, of the University of Amsterdam, Amsterdam, The Netherlands.

“Transvenous lead placement for cardiac sensing and defibrillation has been the standard for ICD design for several decades. However, important limitations of the technique include complications related to lead insertion, such as pneumothorax and cardiac perforation, and long-term complications, such as lead endocarditis and lead dysfunction. To avoid such complications, an entirely subcutaneous ICD was introduced as an alternative,” they added.

In this noninferiority study, Knops and colleagues included 849 patients (median age: 63-64 years; roughly 20% female; median LV ejection fraction: 30%) from 39 centers in the United States and Europe who had a class I or IIa indication for ICD therapy for primary or secondary prevention as outlined by guidelines from the American College of Cardiology/American Heart Association Task Force on Clinical Practice Guidelines and the Heart Rhythm Society, or those from the European Society of Cardiology. Patients were randomized to receive either a subcutaneous ICD (n=426; Cameron Health-Boston Scientific) or a transvenous ICD (n=423).

After a median follow-up of 49.1 months, 68 patients in the subcutaneous ICD group had a composite of device-related complications and inappropriate shocks (deemed the primary end point), compared with 68 patients in the transvenous ICD group, for a 48-month Kaplan-Meier estimate cumulative incidence of 15.1% and 15.7%, respectively (HR: 0.99; 95% CI: 0.71-1.39; P=0.01 for noninferiority; P=0.95 for superiority).

“Patients with a subcutaneous ICD had a higher risk of inappropriate shock than anticipated; the shocks were most frequently precipitated by oversensing of cardiac signals (predominantly T waves) and noncardiac signals,” they added.

In all, 14 patients crossed over from the subcutaneous ICD to the transvenous ICD, while the reverse only happened in 5 patients. The incidence of major adverse cardiac events or hospitalization for heart failure did not differ significantly between the two groups.

Limitations of the study include the non-blinding of members of the clinical events committee, the continued evolution of device technology during the study, clinician inexperience with implantation of the subcutaneous ICD, incomplete screening data, the use of a noninferiority margin to determine between-group differences, and short follow-up in respect to chronic complications.

Investigators plan a longer-term follow-up “because the incidence of lead-related complications increases over time with the transvenous ICD and because battery longevity is a limiting factor for the subcutaneous ICD.”

The results of this trial have been long anticipated, according to Mark S. Link, MD, and Jose A. Joglar, MD, both of the University of Texas Southwestern Medical Center, Dallas, TX, who wrote an accompanying editorial.

Until now, these differing systems have only been compared in observational studies. Obvious differences exist in these systems, they continued, with transvenous ICDs being smaller, lighter and more durable, and capable of offering pacing for both bradycardia and cardiac resynchronization.

Further, noted Link and Joglar, the PRAEORIAN trial was limited to only patients that were eligible for subcutaneous ICD placement. Nevertheless, these results showed that both ICD systems are effective in preventing sudden death.

“The authors should be commended for conducting a rational and straightforward trial, and their results are a welcome addition to the literature. The trial provides data to aid patients and providers in their shared decision-making regarding ICD selection,” concluded Link and Joglar.

Joglar had nothing to disclose.

Link had nothing to disclose.

Antipsychotic use and Risk of Venous Thromboembolism: A Meta-Analysis.