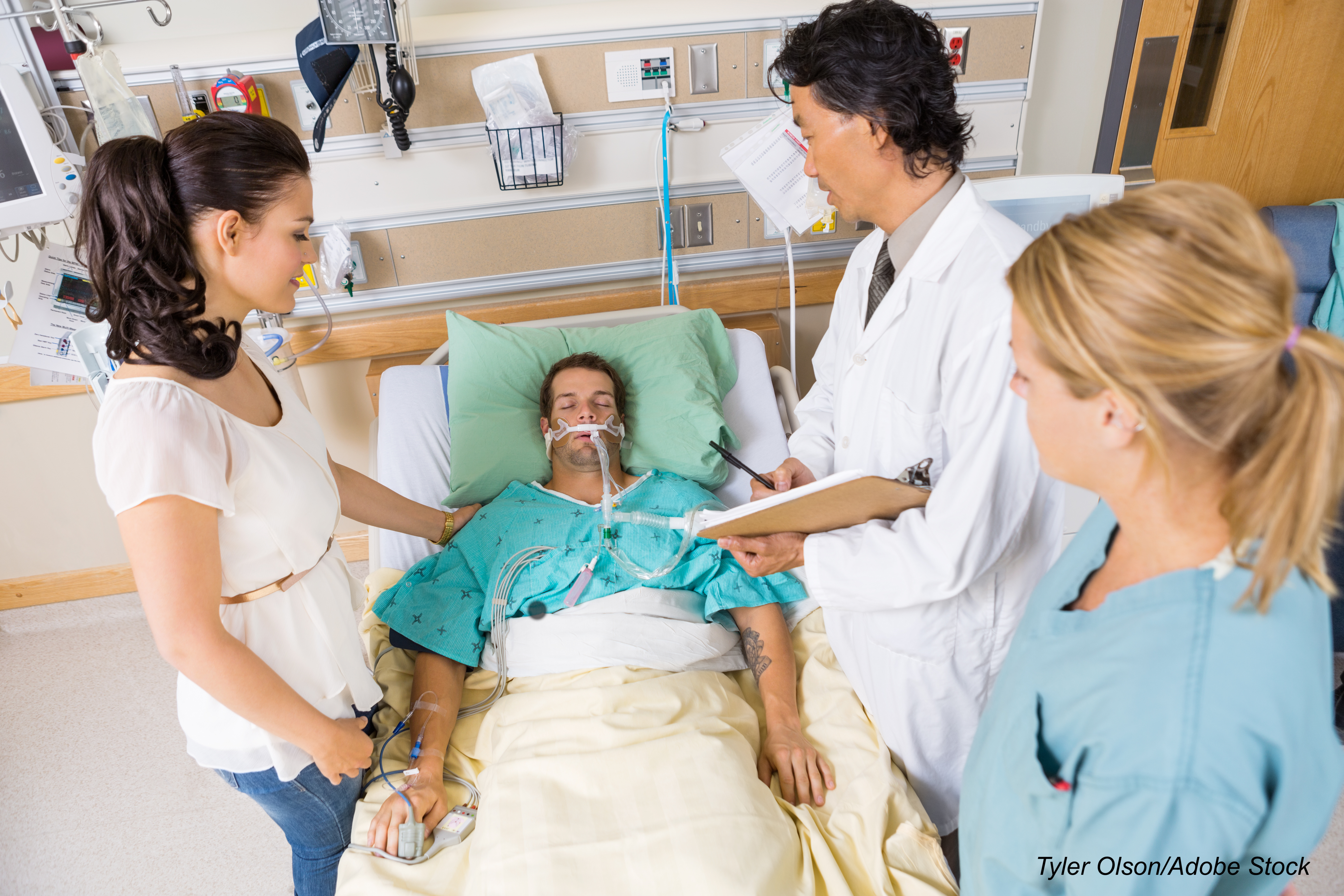 Lack of agreement between physicians and family members over the prognosis of patients with severe acute brain injury was common, a cross-sectional study found.

Discordance over 6-month prognosis predictions between physicians and family members occurred for 61% of ICU patients with severe acute brain injury, reported Whitney Kiker, MD, of the University of Washington, Seattle, and co-authors in JAMA Network Open.

Among the 61% of cases with prognosis discordance, 84% were optimistic belief differences and 16% pessimistic discordance.

“Results of this cross-sectional study suggest that for patients with severe acute brain injury, prognosis discordance between physicians and families was common,” Kiker and colleagues wrote. “Efforts to improve communication and decision-making should aim to reduce this discordance and find ways to target both misunderstanding and optimistic belief differences.”

Patients in the study were admitted to the intensive care unit at a single neuroscience center with acute brain injury, defined as stroke, traumatic brain injury, or hypoxic ischemic encephalopathy, and a day 2 Glasgow Coma Scale score of 12 or less (mean score of 7) between January 2018-July 2020.

Each patient was enrolled between intensive care days 2-7. Surveys were collected from families, physicians, and nurses on the day of enrollment.

Family members were asked to predict the likelihood of the patient recovering to independence in about 6 months on a visual scale from 0% to 100%, and to estimate what the attending physician would predict if asked the same question—and if this was different from their prediction, what explained the difference. They also were asked open-ended questions and questions about trust.

On the same day, the attending physician was asked to predict the likelihood of the patient recovering to independence, using the same response options as for the family. Physician and bedside nurses were also asked to rate the quality of the family’s understanding of prognosis on a 5-point Likert scale, ranging from poor to excellent. The researchers dichotomized these ratings into “fair or worse” versus “good or better” and included nonresponse in the “fair or worse” category.

“First, families described relying on various sources of faith that the patient would have a better outcome than might be expected. These sources included faith in God, in the individual strengths of their loved one, and in the power of optimism to effect a favorable outcome,” the researchers wrote.

“Second, families identified prognostic uncertainty as a justification for their optimistic beliefs,” they added. “Uncertainty encompassed a general understanding that the patient’s chance of recovery was uncertain, a feeling that their own lack of medical knowledge led to uncertainty, and a sense that the physician’s prognostication was cautious owing to uncertainty.”

In an accompanying editorial, Susanne Muehlschlegel, MD, MPH, of the University of Massachusetts in Worcester, noted that the “prevalence of prognosis discordance was strikingly high (61%) and even higher than the 53% discordance in survival prognosis found in a large multicenter study of 229 surrogates of patients with acute lung injury in mixed medical-surgical ICUs.”

“This finding may reflect the fact that prognostic uncertainty may be particularly high in patients with severe acute brain injury and that no evidence-based guidance exists on how physicians can best prognosticate with consistency and minimized bias,” Muehlschlegel wrote.

“The ideal intervention, though, remains uncertain, given the null effect on physician-family prognostic concordance reported by a multicenter trial of a decision aid for ICU patients with prolonged ventilation,” she concluded.

“The quality of physician communication for individuals of minoritized racial groups or non–race-concordant families may contribute to misunderstanding,” Kiker and colleagues observed. “Patients and families of minoritized racial groups are also more likely to experience lack of trust in and dissatisfaction with the health care system, which could facilitate increased optimistic belief difference.”

The study had several limitations, the researchers noted. It took place at a single hospital, which may limit generalizability, and only the attending physician and one family member were asked for prognosis predictions. Conducting surveys early in the ICU stay also may have missed improved concordance later.