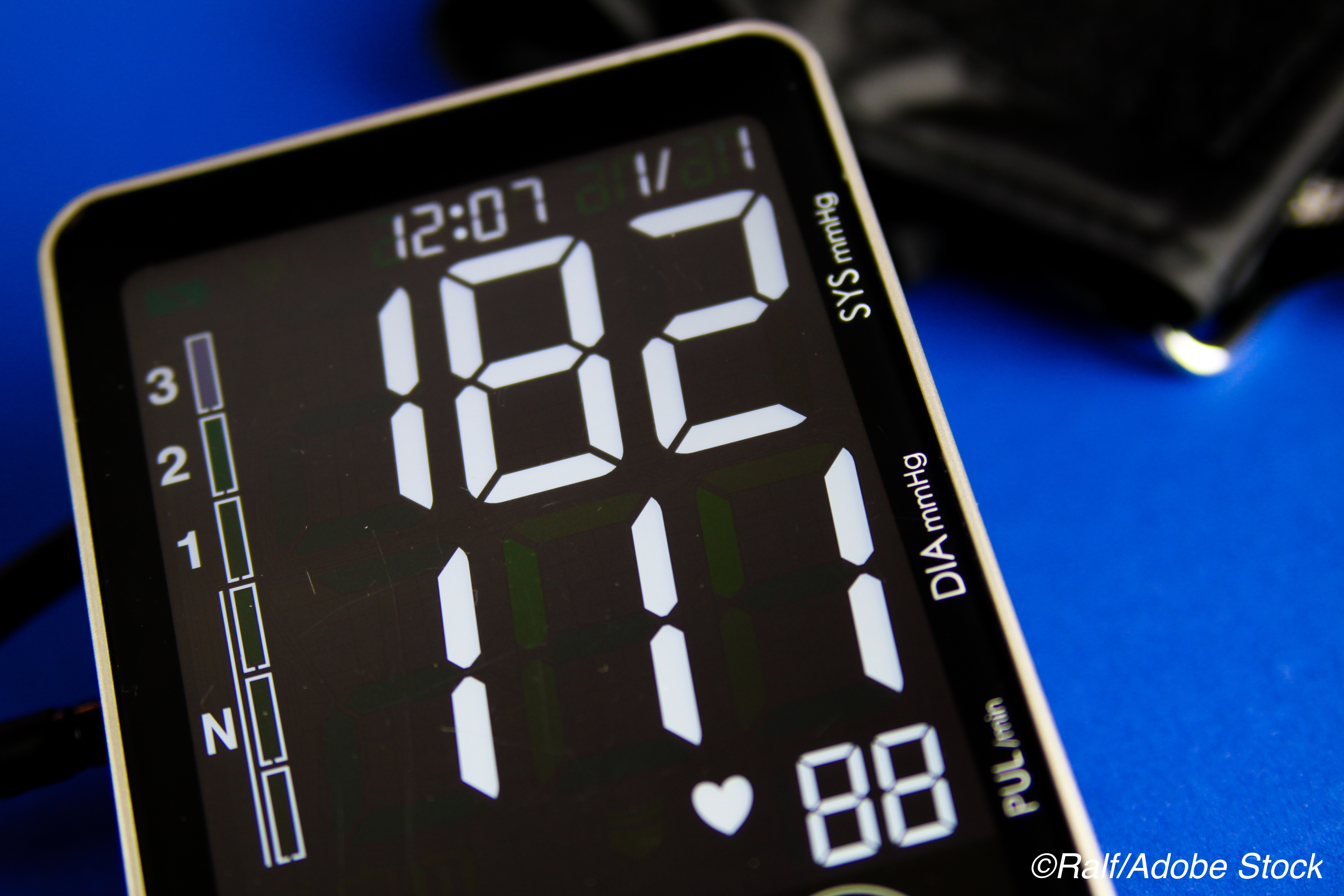 SPRINT was a multicenter randomized trial that compared SBP targets of 120 mm Hg (intensive treatment) versus 140 mm Hg (standard treatment) in patients over 50 without diabetes or stroke. It was stopped when interim analysis showed the 120 mm Hg target reduced cardiovascular events and all-cause mortality, but non-concordant routine versus research BP measurements have raised questions about how to apply the results.

Participants had routine SBPs that were both greater and lower than research-quality SBP, and the difference between routine and research measurements varied by site and over time. In both treatment groups, Bland-Altman analysis showed low agreement between outpatient and research BP, with wide agreement intervals (containing 95% of differences seen between the two measurement conditions) ranging from approximately −30 mm Hg to 45 mm Hg.

The difference between outpatient and research SBP measurement was larger in women than in men for both treatment groups.

“There was a consistent high degree of heterogeneity between the BPs recorded in the electronic health record and trial BPs, with significant variability over time, between and within the participants, and across clinic sites,” Drawz and co-authors wrote. “These results highlight the importance of proper BP measurement technique and an inability to apply one common correction factor (i.e., approximately 10 mm Hg) to approximate research-quality BP estimates when BP is not measured appropriately in routine clinical practice.”

In an accompanying editorial, John Dodson, MD, MPH, of New York University, and Daichi Shimbo, MD, of Columbia University Irving Medical Center, noted that that this study “confirms what has been shown in prior studies, but on a larger scale and within the context of a rigorously conducted randomized trial.”

“Routine office BP and research-quality office BP are different measures — and highlight the major gap between clinical practice and research studies in the management of hypertension,” they wrote.

“How to act on this gap remains a major challenge. The application of a simple ’correction factor’ for each individual, while convenient and appealing, ignores between-patient variability (including some individuals who have routine BP that is lower than research-quality BP) as well as potential differences between women and men.”

Blood pressure measurement in the office setting is the primary method for managing hypertension in individual patients, but the goals set for BP targets are derived from clinical trials with formal measurement protocols not often followed in routine clinical work.

These measurements are known to differ. For example, a 2017 study of patients with chronic kidney disease found that research-grade systolic BP was a mean 12.7 mm Hg lower than clinic measurements with wide limits of agreement (-46.1 to 20.7 mm Hg). Consequences include over- and under-treatment with associated effects on outcomes as well as increased costs.

The measurement mismatch also played a role in the adoption of a 130 mm Hg goal rather than the SPRINT-demonstrated 120 mm Hg systolic BP target in 2017 American College of Cardiology and American Heart Association guidelines, and a 2018 review of BP measurement in clinical trials concluded by arguing that guideline-recommended BP measurement techniques are desirable in routine clinical practice.

“Differences between routine SBP and research-quality SBP across the participants do not necessarily apply to every individual,” the editorialists noted. “Efforts at training office staff in proper BP measurement (to more closely approximate trial measurement accuracy), while well intentioned, may not result in large-scale and sustained improvements in BP measurement.”

In the present study, Drawz and colleagues linked electronic health record data with SPRINT data in 49 of 102 participating study sites to identify 3,074 participants for analysis. Mean age was about 69 and 19.2% were female. Median follow-up was 3.2 years with a median of 16 BP measurements.

In SPRINT, BP was measured after 5 minutes of quiet rest using an automated oscillometric device, proper participant positioning, appropriate cuff size and positioning, and a mean of three BP readings with no observer in the room in line with AHA recommendations.

“There are several pathways forward,” the editorialists noted. Future research should evaluate which aspects of the BP measurement protocol — such as patient’s position, rest period duration, or presence of an observer — are most associated with the accuracy of clinic BP. Automated oscillometric BP devices without an observer present also could be considered, as could telemedicine management with self-measured BP monitoring or ambulatory BP monitoring for 24-hour periods.

Limitations include a largely male study cohort that constrains generalizability. In addition, blood pressure measurements were not obtained at the same occasion and may be subject to temporal variability.

The work presented in this analysis was supported by grants from NIH and funding from the Alzheimer’s Association.

Drawz reported receiving grants from the NIH during the conduct of the study.