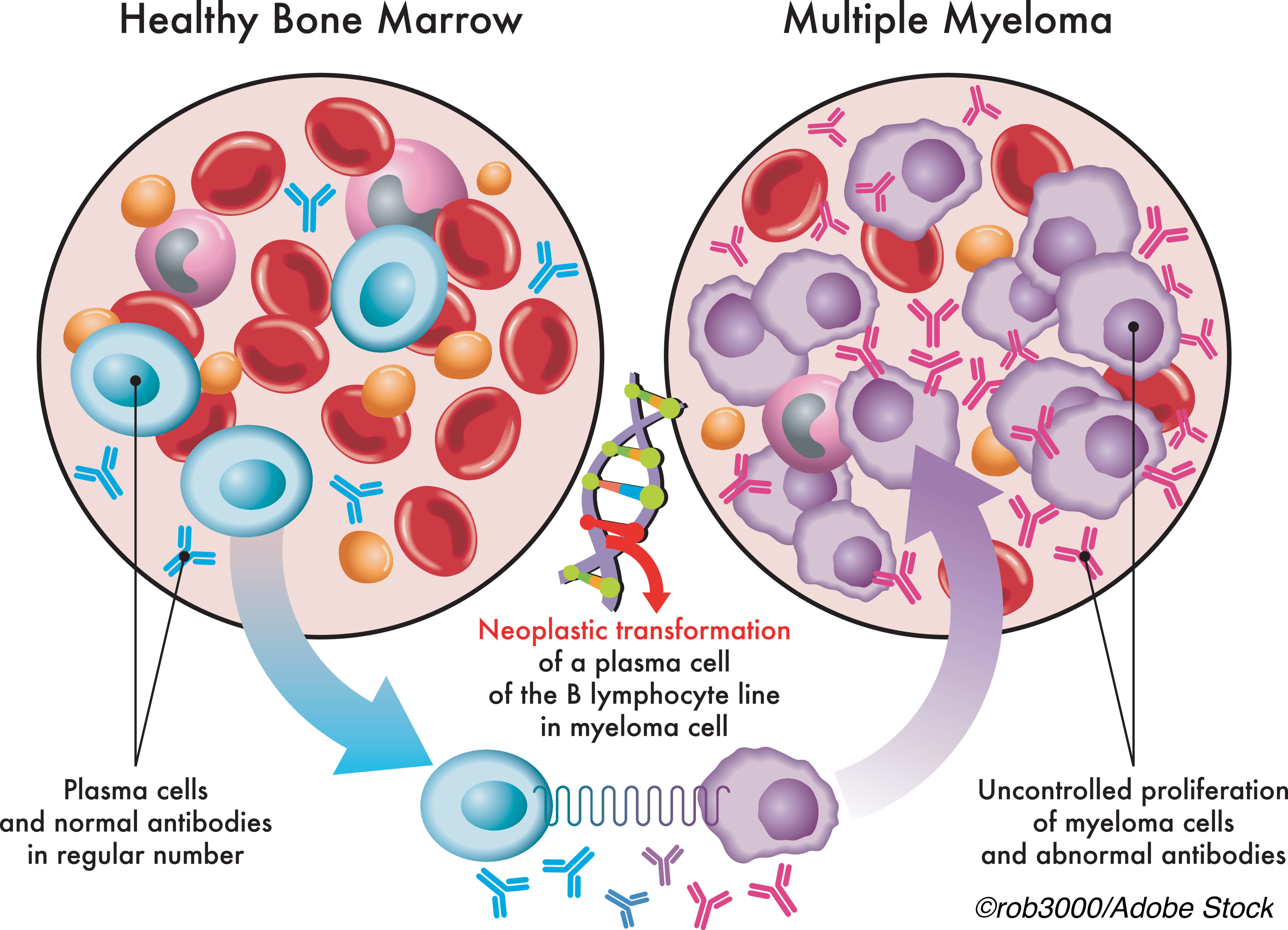 Treatment of multiple myeloma with a once-weekly triplet regimen that includes the new agent selinexor significantly improved progression-free survival when compared with a bortezomib-dexamethasone twice-weekly doublet, researchers reported in The Lancet.

Patients treated with the once-weekly combination of selinexor, bortezomib, and dexamethasone achieved a progression-free survival of 13.93 months compared with progression-free survival of 9.46 months among the patients with multiple myeloma who were taking the combination of bortezomib and dexamethasone (P=0.0075) — a 30% reduction in the risk of progression or death, reported Sebastian Grosicki, MD, chairman of hematology and cancer prevention at the Medical University of Silesia, Katowice, Poland, and colleagues

In the open-label BOSTON trial, Grosicki and colleagues randomized 195 patients — all of whom had been treated with one to three lines of multiple myeloma therapies — to receive the once-weekly triplet, while another 207 patients were treated with the twice-weekly doublet.

“A once-per-week regimen of selinexor, bortezomib, and dexamethasone is a novel, effective, and convenient treatment option for patients with multiple myeloma who have received one to three previous lines of therapy,” the researchers reported.

The median follow-up in the trial was 13.2 months among the patients who were taking the three-drug therapy and 16.5 months for the patients taking the two-drug combination in the randomized, open-label, Phase II trial, they wrote.

Despite the addition of one medication, the reduction in the number of doses of bortezomib resulted in significantly less Grade 2 or greater episodes of peripheral neuropathy in the patients receiving the triplet regimen, Grosicki noted. In the triplet, 41 patients complained of peripheral neuropathy — 21% of the patient population — compared with 70 patients (34%) of the group taking the twice-weekly two-drug therapy (P=0.0013), he reported. That translated to a 50% reduction in the risk of developing neuropathy.

In summarizing the study, the researchers wrote, “This regimen reduced the risk of progression or death by 30% and induced higher rates of overall response and deep response compared with the doublet therapy. Efficacy was consistent across various patient subgroups, including patients older than 65 years and those who are frail, those with one versus two to three previous lines of therapy, and patients who had received previous lenalidomide treatment.

“Moreover, efficacy was particularly noteworthy in patients who had not previously been treated with a proteasome inhibitor and in patients with high-risk cytogenetic abnormalities,” they reported. “Furthermore, the once-weekly combination was associated with lower rates and severity of bortezomib-induced peripheral neuropathy, with no new safety risks.”

While the treatment was effective, Joseph Mikhael, MD, professor of applied cancer research and drug discovery at the Translational Genomics Research Institute, City of Hope Cancer Center, Duarte, California, told BreakingMED that there may be better combinations with selinexor coming down the pike.

“BOSTON was a very important step in developing selinexor, even though it may not be the final step,” he said. “I suspect that in time it will pave the way for selinexor to be partnered with other agents.

“Selinexor has proven itself in the very heavily relapsed space as a single agent,” Mikhael added, “so this study is important, as it now demonstrates that selinexor can partner with other drugs in the myeloma sphere. That is always an important step with any of these agents, as we have seen with daratumumab and so many other drugs. You have to be able to play in the same sandbox with others. That is a very important point, and that is never a given because there can be overlapping toxicities.”

He said that, actually, adding selinexor to other agents appeared to be better tolerated when considering problems such as anorexia and nausea that are watched closely with single agent selinexor. As a single agent, selinexor is given twice a week; the once-weekly dosing appears to reduce gastrointestinal side effect, Mikhael said.

Mikhael also said that another point was that selinexor was combined with bortezomib in the way that bortezomib is most often used in clinical practice in the United States. He said that, in general clinical use, bortezomib is given subcutaneously once weekly, but for regulatory reasons it was given twice weekly in the clinical trial.

“This trial also validates selinexor in a less heavily-treated population — and that is not always a given either,” he added.

On the other hand, Mikhael said that the trial may not be relevant in the United States, where fewer clinicians are using bortezomib in early-stage relapse settings with multiple myeloma because newer agents are preferred. It is also used less often because peripheral neuropathy can be a problem in patients.

“This trial does open the door for use earlier in patients with multiple myeloma, but it probably will not be our first go-to regimen after first relapse,” he said, adding that with many regimens and drugs available for treatment of the disease, the art of medicine is to match the patients, the stage of disease, and the therapy.

In BOSTON, the median age of the patients was 66 years, and about 57% were men; about 90% were in performance status 0-1; and the patients had been diagnosed with multiple myeloma for about 3.7 years.

To minimize nausea, all patients received 5-hydroxytryptamine (8 mg or equivalent) before the first dose of study drug and two to three times daily on days 1 and 2 of each cycle, as needed.

The trial was funded by Karyopharm Therapeutics.