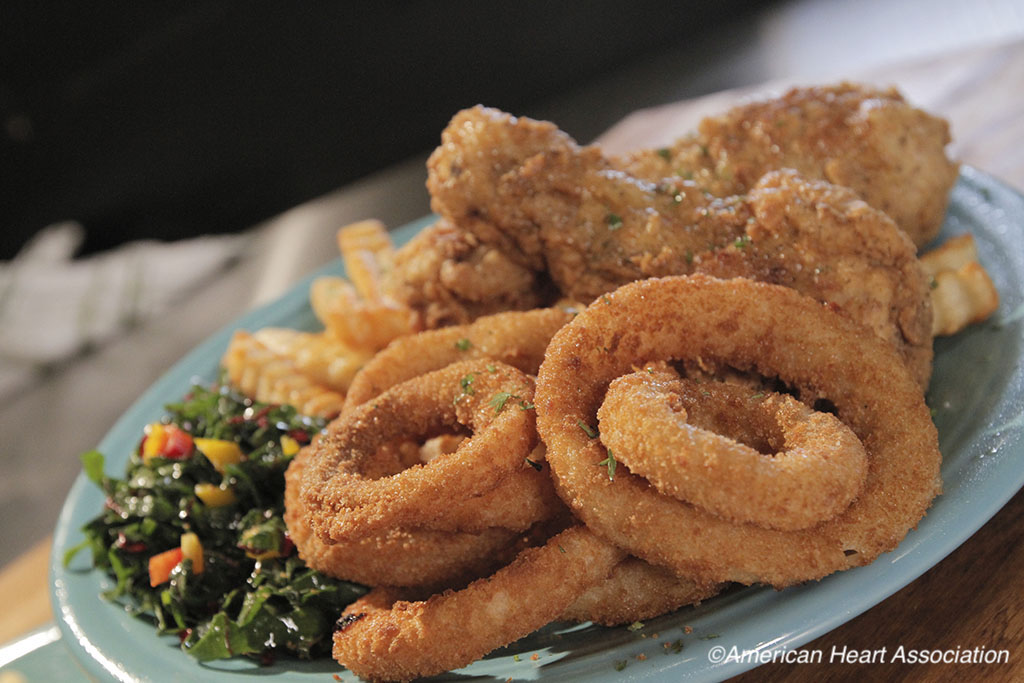 What and how you eat can have a dramatic impact on your long-term health outcomes: Researchers found that regularly consuming a Southern U.S.-style diet may increase risk of sudden cardiac death (SCD), while a Mediterranean diet appeared protective against SCD in patients with no history of coronary heart disease (CHD).

In the original 2015 REGARDS study, researcher James M. Shikany, DrPH, of the Division of Preventive Medicine at the University of Alabama at Birmingham, Alabama, and colleagues derived a series of dietary patterns and investigated the associations of those patterns with CHD events. In one of their analyses, they found that patients who had higher adherence to the Southern dietary pattern—characterized by added fats, fried foods, eggs, organ and processed meats, and sugar-sweetened beverages—had a 56% higher rate of incident acute CHD and all-cause mortality versus those with lower adherence, while those who stuck to a Mediterranean diet—characterized by vegetables, fruits, whole grains and healthy fats, fish and poultry, beans and eggs, and limited intake of red meat—saw the opposite association.

For this analysis, published in the Journal of the American Heart Association, Shikany and colleagues set out to assess the associations of the Mediterranean, Southern, and other dietary patterns with risk of SCD, or death attributable to cardiac causes within one hour of symptom onset.

“In this analysis of participants in the ongoing REGARDS study, we observed a trend toward an inverse association of the Mediterranean diet score and risk of SCD overall after ≈10 years of follow-up,” they found. “Further analysis revealed that this association was evident only in participants with no history of CHD at baseline. The Southern dietary pattern showed a trend toward a positive association with risk of SCD overall, but although the results were of similar magnitude, they were not statistically significant in the stratified analyses. In participants with a history of CHD at baseline, the sweets pattern was inversely associated with risk of SCD.”

While the study was observational, Shikany and colleagues noted that these findings suggest diet may be a modifiable risk factor for sudden cardiac death, and dietary patterns should be discussed with patients.

In a press release regarding the study results, Stephen Juraschek, MD, PhD, a member of the American Heart Association’s Nutrition Committee of the Lifestyle and Cardiometabolic Health Council, noted that these findings “support the notion that a healthier diet would prevent fatal cardiovascular disease and should encourage all of us to adopt a healthier diet as part of our lifestyles. To the extent that they can, people should evaluate the number of servings of fruit and vegetables they consume each day and try to increase the number to at least 5-6 servings per day, as recommended by the American Heart Association. Optimal would be 8-9 servings per day.”

However, he also noted that it is important to consider issues of health equity, food security, and social determinants that may be at play in patients’ dietary options.

“The authors describe the ’Southern Diet’ based on the U.S. geography associated with this dietary pattern, yet it would be a mistake for us to assume that this is a diet of choice,” he wrote. “I think American society needs to look more broadly at why this type of diet is more common in the South and clusters among some racial, ethnic or socioeconomic groups to devise interventions that can improve diet quality. The gap in healthy eating between people with means and those without continues to grow in the U.S., and there is an incredible need to understand the complex societal factors that have led and continue to perpetuate these disparities.”

The REGARDS study is a national, population-based, longitudinal cohort study involving 30,239 community-dwelling Black and White patients ages ≥45 years enrolled from 2003-2007—the baseline cohort was 42% Black and 55% women. Patients were excluded if they were neither Black nor White, were undergoing active cancer treatment, had chronic medical conditions that precluded long-term participation, had cognitive impairment, were residing in a nursing home, or were unable to communicate in English.

Dietary patterns were based on the “major loading factors” of each pattern, the study authors explained, and were categorized as follows:

To determine SCD events, REGARDS participants or next of kin were contacted by telephone in regular, 6-month intervals—”Once a death was identified, an exit interview with the next of kin was conducted and, if possible, medical records were obtained, including those from the last hospitalization before death,” they explained.

Oddly, the study authors found that adherence to the Sweets pattern was inversely associated with SCD risk (HR, 0.49; 95% CI, 0.28–0.88; Ptrend=0.0093), a finding for which the study authors admitted they had “no viable explanation.”

Study limitations included that the Block 98 FFQ questionnaire was not validated in the REGARDS population; correction for potential measurement error was not possible; diet was only assessed at one time point, and dietary changes could not be accounted for; the presence of CHD at baseline was based on self-report, which may have introduced bias; and that results may not be generalizable to groups other than individuals of Black or White race in the U.S.